The sixth annual donorCentrics® Sustainer Summit took place on March 17th and 18th, 2020, just days into the first state of emergency announcements and closures that would eventually spread across the country. Originally scheduled as a live event, the summit was transformed in less than one week to an interactive virtual event, with the COVID-19 pandemic and its short and long-term impacts on fundraising, the primary concern.

This year’s summit included staff from 33 large, primarily direct marketing focused nonprofit organizations representing a variety of sectors. Benchmarking data, drawn directly from participant CRMs and standardized to allow for consistent comparisons, included 16 million donors who gave 56 million gifts for a total of $2.3 billion in FY2019 (the donor count is the composite sum of each organization and will count donors multiple times who give to multiple organizations). The analysis is based on a July – June fiscal year, covering the period of FY2015 through FY2019.

Our meetings opened with a discussion of the immediate impact of the pandemic on participants and their programs. They were worried, of course — unsure of what the future holds but very much aware that fundraising will look different for the foreseeable future. Even so, there was a sense of resilience, not panic. Top of mind for the meeting were the lessons from the past that could help us navigate the present.

In the five-year period under analysis, FY2017, the year of great surge giving across many different sectors, is nestled right in the middle. This gives us a unique vantage point in FY2019. We can analyze giving in the more tempered period leading up to FY2017 and the impacts of FY2017 on donor files in the years that followed. 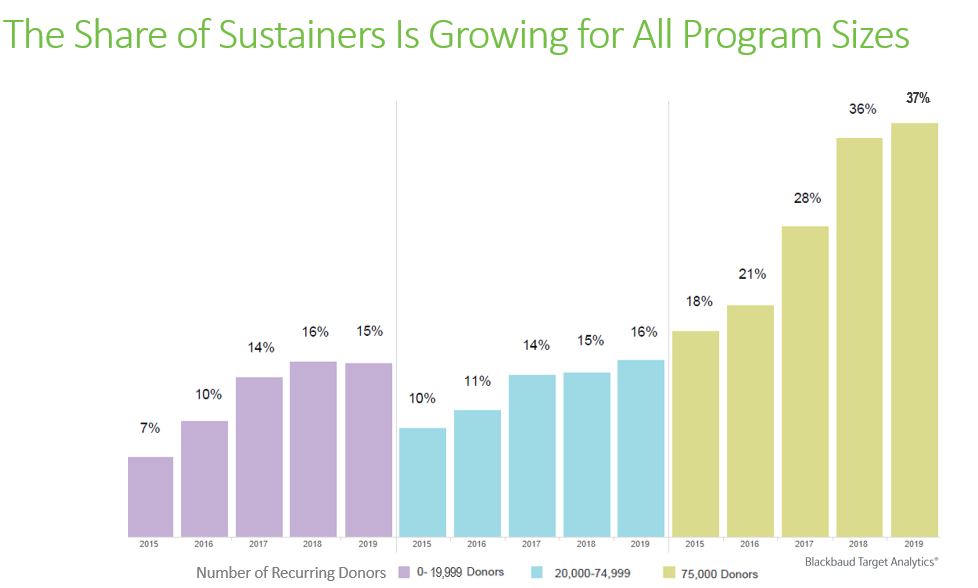 Much of this growth spiked in FY2017 and FY2018 as many of these programs had laid the groundwork for sustainer acquisition in advance of the surge in giving that occurred in FY2017. In FY2019, the median share of donors making sustainer gifts had increased by 5 percentage points to 18% since FY2015. The share of revenue from sustainers saw even greater growth, rising from 21% in FY2015 to 32% in FY2019, driven by increasing donor counts and value.

The average sustaining gift has been consistent at $22 for most of the last five years. Driving the increase in donor value is gift frequency, with greater numbers of long on file sustainers making all 12 gifts in a year. Between FY2018 and FY2019, the number of donors making sustainer gifts for three or more years in a row increased by 19%. This would include those surge year donors who started their sustainer giving in FY2017. 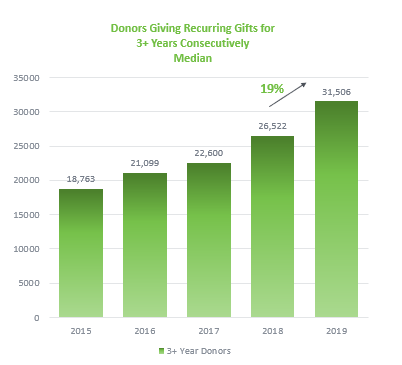 Canvassing (including face to face/street and door to door) was an important and growing channel for sustainer giving acquisition in FY2019. More than half of the organizations were engaged in canvassing, ten of which reached an all-time high for canvass-acquired donors. Retention rates in month 13 for canvass-acquired sustainers reached 48% in FY2019.

Even at the very early stage of the pandemic, participants indicated that programs were experiencing upheaval as canvassing has been suspended. While certainly problematic for donor acquisition, participants with in-house canvass teams expressed extraordinary compassion showing as much concern for their talented employees and advocates as the financial impact on their programs.

Payment method plays a key role in 13th month retention with donors acquired via direct debit retaining at 10 – 15 percentage points higher than donors on credit card. With the expansion of digital fundraising happening via mobile devices, online payment methods such as PayPal are increasingly important. In FY2019, 54% of all sustainer summit participant organizations were using PayPal.

Historically, during times of economic uncertainty, organizations have needed to monitor sustainer cancellations closely. Sustainer Summit participants were preparing their teams with language for use to abate cancellation requests including downgrading messaging and “pausing” monthly gifts for a specific period.

We can’t predict the impact of the COVID-19 pandemic on fundraising in 2020 or beyond. But we do know that having a recurring giving strategy in place during a period of emergency or reactionary giving can greatly improve retention of donors that may otherwise be sporadic donors at best.

We are grateful to all the participants of the donorCentrics Sustainer Summit. Especially when one remembers that the shifting and pivoting of strategies and tactics was happening while staff were packing up computers and monitors and power chords and setting up make-shift home offices in kitchens and guest bedrooms. It is truly remarkable that these dedicated fundraisers also made the time to gather, virtually, for two days to learn from past experiences to better weather the current storm and then share these findings with others so that they may, too.