“We are incredibly excited and honored that Connie Britton will join us at bbcon 2019,” said Catherine LaCour, Blackbaud’s chief marketing officer. “Connie’s involvement as a Goodwill Ambassador for the United Nations Development Programme is just one example of her dedication to help good take over. I have no doubt that the thousands of change agents who attend bbcon to share the latest insights, trends, and innovation will benefit from Connie’s passion and enthusiasm for the ecosystem of good.” 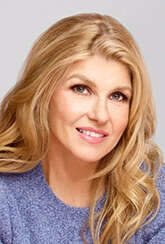 Britton is an actress who continually receives accolades for her work in television and film. After stand-out roles on series such as ”Spin City,” ”24,” and ”The West Wing,” she starred in one of the best reviewed shows on television, NBC’s ”Friday Night Lights,” for which she received an Emmy® nomination in 2010 and then again in 2011. Britton returned to the small screen in 2012 to star in ABC’s “Nashville,” in which she played Rayna James for five seasons, earning Britton her first Gold Globe nomination and fourth Emmy nomination. She also starred as the female lead in the first season of “American Horror Story” - a role that led to another Emmy® nomination for the actress.

Throughout her career, Britton has devoted much of her time to a wide range of charity work both in the United States and internationally. As a Goodwill Ambassador for the United Nations Development Programme, she raises awareness of UNDP’s work in poverty eradication and women’s empowerment, advocating to the American and global public.

“Blackbaud’s bbcon 2019 conference will undoubtedly be an inspiring event that will help thousands of people who are committed to building a better world,” said Britton. “I’m humbled to have been asked to join this event, and I look forward to interacting with so many motivating people and organizations.”

This year, bbcon attendees can look forward to over 250 breakout sessions with dedicated content; presentations from industry thought leaders; the latest Blackbaud tech innovations; and the knowledge and resources to advance their missions.

Except for historical information, all of the statements, expectations, and assumptions contained in this news release are forward-looking statements that involve a number of risks and uncertainties. Although Blackbaud attempts to be accurate in making these forward-looking statements, it is possible that future circumstances might differ from the assumptions on which such statements are based. In addition, other important factors that could cause results to differ materially include the following: general economic risks; uncertainty regarding increased business and renewals from existing customers; continued success in sales growth; management of integration of acquired companies and other risks associated with acquisitions; risks associated with successful implementation of multiple integrated software products; the ability to attract and retain key personnel; risks related to our dividend policy and share repurchase program, including potential limitations on our ability to grow and the possibility that we might discontinue payment of dividends; risks relating to restrictions imposed by the credit facility; risks associated with management of growth; lengthy sales and implementation cycles, particularly in larger organization; technological changes that make our products and services less competitive; and the other risk factors set forth from time to time in the SEC filings for Blackbaud, copies of which are available free of charge at the SEC's website at www.sec.gov or upon request from Blackbaud's investor relations department. All Blackbaud product names appearing herein are trademarks or registered trademarks of Blackbaud, Inc.

Connect with Blackbaud on our social media channels: